Why Paganini Is Popular At Violin Competitions

Why Paganini Is Popular At Violin Competitions

If you’re a musician, then more likely than not you’ve heard of Niccolò Paganini. For sure you've played it at a violin competition! For those wishing to know a little more about his history, here are a few facts referenced from his Wikipedia article, which you can find here.

Having been born in Genoa, then capital of the Republic of Genoa, Niccolò Paganini was the third of the six children of Antonio and Teresa (née Bocciardo) Paganini. Paganini's father was an unsuccessful trader, but he managed to supplement his income by playing music on the mandolin. At the age of five, Paganini started learning the mandolin from his father, and moved to the violin by the age of seven. His musical talents were quickly recognized, earning him numerous scholarships for violin lessons.

Throughout his career, Paganini also became close friends with composers Gioachino Rossini and Hector Berlioz. Rossini and Paganini met in Bologna in the summer of 1818. In January 1821, on his return from Naples, Paganini met Rossini again in Rome, just in time to become the substitute conductor for Rossini's opera Matilde di Shabran, upon the sudden death of the original conductor. Paganini's efforts earned gratitude from Rossini.

No doubt, Paganini’s compositional style was greatly influenced by famous composers Rossini and Berlioz. In fact, you can find many passages in Paganini’s work that are very similar to the two latter composers, who had an enormous impact on Paganini’s career.

Above is pictured Paganini’s Violin Concerto No. 1, written in the year 1818. Classical music was in a great transformational stage at this time, and the light, colorful concerto style was extremely popular among virtuoso performers.

Paganini’s violin concertos were some of the most well-attended public concerts during his career, although much of his life was spent freelancing around Europe. His music was always well-received, and through the generous benefactors that supported his career, he was able to establish a foothold as one of the greatest classical composers of all time.

Some of the most popular pieces of music asked for in modern violin competitions are Paganini’s Caprices. Below, we’ve included a snippet from the original, handwritten manuscript of his 24 Caprices for Solo Violin, Op.1: 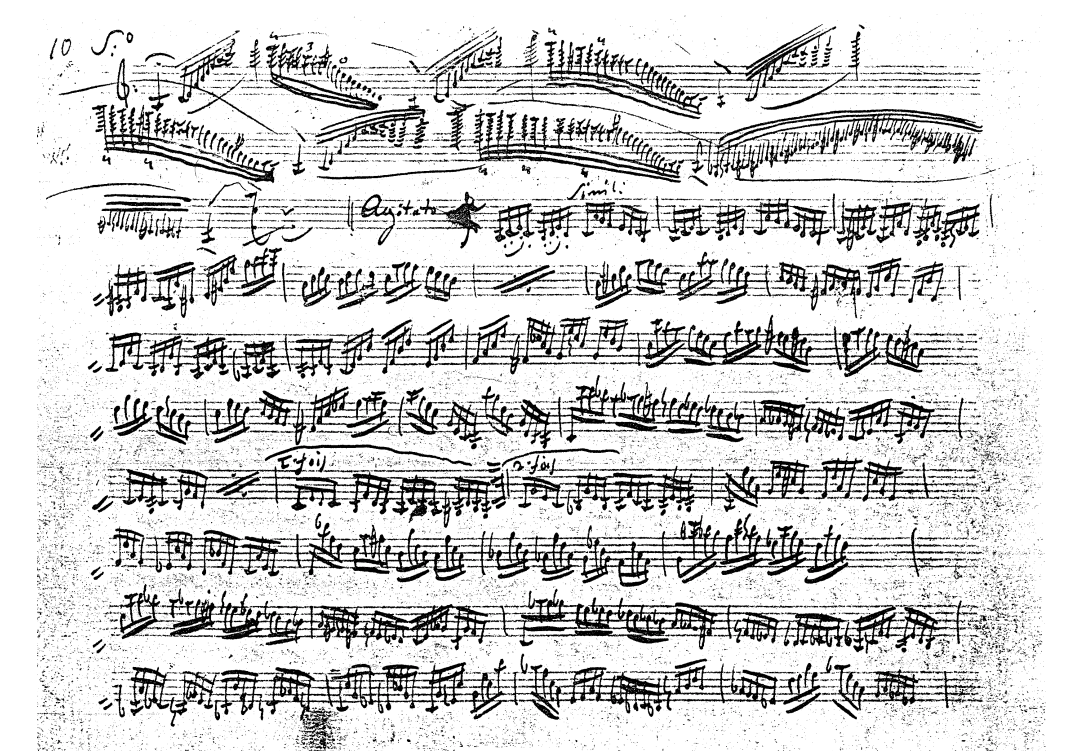 Notice that Paganini had absolutely every intention of writing virtuoso material and took complete freedom with challenging violinists at their instrument. This then begs the question:

Why are his caprices so often asked for at violin competitions?

The answer is fairly simple: out of all of Paganini’s wonderful compositions, there is a no larger collection of virtuoso pieces such as his 24 Caprices for Solo Violin. Each Caprice in and of itself has a distinct character apart from the others. This set of caprices also was probably not the very first set of compositions that Paganini tried his hand at, but according to historians it was certainly the most successful – thus, it is a popular choice in classical violin competitions.

In short, if one is serious about the violin (or even the ambitious trumpet player who wants to tackle Paganini’s Moto Perpetuo, Op. 11), then consider working on the 24 Caprices for Solo Violin, Op.1 for your next solo competition! (To learn more about how you can become a member of iClassical Academy and learn these pieces from our Master Teachers, click here.)