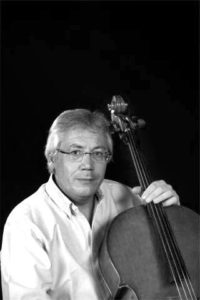 Péter Szabó from Hungary is the principal cellist of the Budapest Festival Orchestra and gives Master Classes worldwide.

As solo cellist of the World Orchestra for Peace, founded by Sir George Solti, he received in 2010 the UNESCO Artist for Peace.

In that same year, he was awarded the Franz Liszt Prize for the Hungarian State's artistic accomplishments.

In 2010, Péter Szabo founded the Sinfonietta Pannonica Chamber Orchestra, of which he is the artistic director and conductor.