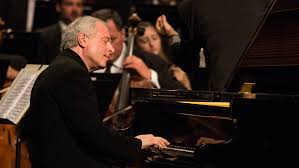 Sir András Schiff is world-renowned as a pianist, conductor, pedagogue and lecturer. Music critics and audiences alike continue to be inspired by the masterful and intellectual approach he brings to each masterpiece he performs.

Born in Budapest, Hungary in 1953, Sir András studied piano at the Liszt Ferenc Academy with Pál Kadosa, György Kurtág and Ferenc Rados; and in London with George Malcolm. Recitals and unique cycles, including the complete works of Bach, Haydn, Beethoven, Schubert and Bartók constitute an essential component of his work.

Having collaborated with the world's leading orchestras and conductors, he now focuses primarily on solo recitals, play-conducting appearances, and exclusive conducting projects. Sir András Schiff's many honours include the international Mozarteum Foundation's Gold Medal (2012), Germany's Great Cross of Merit with Star (2012), the Royal Philharmonic Society's Gold Medal (2013), a Knighthood for Services to Music (2014) and a Doctorate from the Royal College of Music (2018).