A real cornerstone for every cellist, to be watched and learned with great attention. In these etudes, our teacher shows how to practice and master crucial elements like anticipation, preparation of the upcoming bow angle, arm elevation, large jumps from C to A string, and of course left-hand preparation as a complement to the bowing. No cellist can't miss such fundamental knowledge! 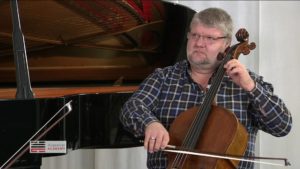 What is the real meaning of the word "Spiccato" for a cellist? Watch here how to achieve different systems to practice it, right after learning how to master the rebound of the Bow on your strings.

From history to technicalities - the endpin

Popper was one of the last great Cellists who didn't use the endpin, which nowadays we can hardly see, but as a matter of fact, the endpin can vary in its length, shape, material, and thickness. Here's a recap of the endpin evolution:

A variety of materials can be used for cello endpins. The earliest endpins were made of wood, but more durable metal options began replacing wooden ones in the early 20th century. Going into the 21st century, tempered steel remained the most popular choice for cello endpins. Some cellists prefer fibreglass or carbon fibre endpins, however, which are lighter weight and absorb less of the instrument's vibration. Regardless of the material of the endpin, it is usually capped with a rubber stopper that keeps its sharp end from damaging flooring.

Styles for the length of cello endpins have varied over the years. Early endpins were only a few inches long, whereas contemporary versions can typically be extended up to 20 inches (45 cm) below the bottom of the instrument. Longer endpin results that the musician is holding the instrument at a less upright angle, which some people find a more natural playing position.
To make the instrument's angle even closer to horizontal, some players favour a bent endpin. This is one of the more recent developments in cello equipment and had not gained widespread popularity as of the early 21st century. While some players feel that they have greater control over their instrument's tone quality with a bent endpin, others still prefer the more upright positioning of the instrument. Some cellists also think that a bent endpin does not support the cello's weight as well as a straight endpin, which may result in damage to the instrument.

Many musicians usually think of Popper as a set of studies primarily devoted to left-hand technique, which is a mistake, because the Etudes contain many demands made on the bow arm as well. One of the most demanding challenges in playing Popper is to maintain a beautiful, spun sound in the etudes featuring long slurs over many shifts and string crossings especially in those with asymmetric slurs. Although a little extra bow speed for shifts and string crossings can be helpful, the budget-conscious cellist cannot always afford such luxury over some of the longer slurs. Several Popper etudes explore the vital issue of bow apportionment. And Maestro Yablonsky is very much experienced and skill to render these essential features of the sound, which could be crucial not only to play Popper but to achieve your best sound in many other compositions too.

Talking about bow: how to master the risk to go up & down with the bow between bridge and neck, as it could condition your whole playing; and to master this issue perfectly, your left hand has also to give its contribution.

Not a member yet?  Select your plan here

Or buy the Popper single Masterclass in the shop