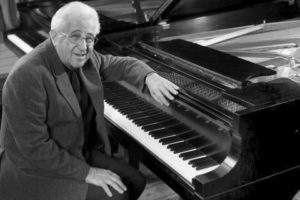 The Hungarian-born British pianist Peter Frankl is a visiting professor at the Yale School of Music within Yale University and an Honorary Professor of the Liszt Academy of Music in Budapest.

He studied at the Liszt Academy of Music in Budapest, with Professors Lajos Hernádi, Kodály, and Weiner.

Peter made his name on the international circuit as a young pianist in the 60’s.

He has performed with the leading orchestras in the United Kingdom, USA, and Europe and appeared with conductors such as Claudio Abbado, Vladimir Ashkenazy, Herbert Blomstedt, Pierre Boulez, and Riccardo Chailly.

Among his many solos, orchestral, and chamber music recordings are the complete Schumann and Debussy piano works. Peter Frankl is a passionate teacher with a lot of humor.

He encourages young pianists to be versatile and daring to find their own and unique way of performing.