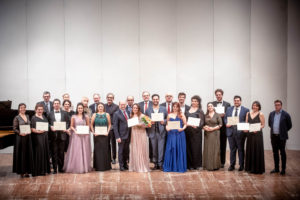 Italy is known as the cradle of Opera and Lyrical singing. No wonder that its famous for hosting so many important and known singing contests. The history of the Eurovision Song Contest, for example, began with an idea of Sergio Pugliese, of the Italian television RAI, and then later approved by Marcel Bezençon of the European Broadcasting Union (EBU). The contest was based on the Italian Sanremo Music Festival and was designed to test the limits of live television broadcast technology.

The first contest took place in Lugano on 24 May 1956, where seven nations participated. As the Contest progressed, the rules grew increasingly complex and participation levels rose to pass forty nations at the end of the 20th century. As more countries came on board over subsequent decades and technology advanced, the EBU attempted to keep up with national and international trends.

The famous San Remo Singing Contest was born as the first Italian Singing Festival in 1948 at La Capannina, a historical local in Versilia, and the event inspired some years later Pier Bussetti, of the Sanremo Casino, who together with Giulio Razzi devised the competition that was held for the first time in Sanremo in 1951.

1) To identify young, exceptional operatic talent;
2) To provide musical and theatrical training for these artists;
3) To produce operatic performances of the highest calibre in which to display these artists.

To this day, AsLiCo has remained staunchly committed to its mission and has led the way in pioneering new initiatives and increased opportunities for young singers. Below we listed some of the highlights of AsLiCo's history:

1949 December 31 - As.Li.Co. was established as a not-for-profit organisation.1950 In its first year, As.Li.Co. auditions hosted 326 young singers of which 29 were selected to participate in training and performance. Only singers from Italy were eligible.

1951 The young Carlo Bergonzi debuted as Riccardo in Un Ballo in Maschera and Don Alvara in La Forza del destino.

1997 Opera Domani is established in collaboration with the Regione Lombardia. This project provides interactive training of an opera to school-aged children and their teachers. Each year, the production associated with this project tours throughout Italy. Preparation and training are provided to students and teachers in all tour locations.

WINNERS FOR THE ROLES OF:
COMPETITION FOR OPERA ROLES (European)
Opera season

iClassical Academy is a proud media partner of AsLiCo and sustains its objectives and goals.